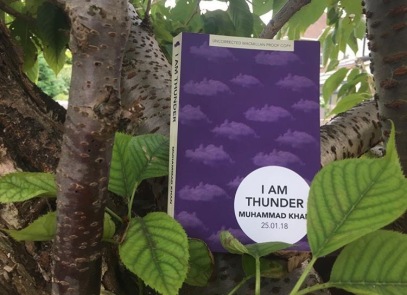 Fifteen-year-old Muzna Saleem, who dreams of being a writer, struggles with controlling parents who only care about her studying to be a doctor. Forced to move to a new school in South London after her best friend is shamed in a scandal, Muzna realizes that the bullies will follow her wherever she goes. But deciding to stand and face them instead of fighting her instinct to disappear is harder than it looks when there’s prejudice everywhere you turn. Until the gorgeous and confident Arif shows an interest in her, encouraging Muzna to explore her freedom.

But Arif is hiding his own secrets and, along with his brother Jameel, he begins to influence Muzna with their extreme view of the world. As her new freedom starts to disappear, Muzna is forced to question everything around her and make a terrible choice – keep quiet and betray herself, or speak out and betray her heart?

A stunning new YA voice which questions how far you’ll go to protect what you believe in.

Okay, the first thing that I want to say is that I absolutely loved this book. Everything from the characters to the plot was brilliant, and I read it in a matter of days. I think that this books covers some issues that are very relevant in todays society, such as terrorism and Islamophobia, which I think is very important.

The main character, Muzna Saleem, is a Muslim. This is actually the first book that has featured a Muslim main character I’ve read, and I’m so eager to read more now. Representation in books is something that is desperately, so that is part of the reason that I love this book so much. I really liked Muzna, she was courageous, brave and stood up for what she thought was right, despite certain things trying to influence her to do the opposites.

As I said before, Islamophobia is an issue that is tackled in this book. Whilst I know that this is important to cover as it is something that Muslim’s face in their everyday lives, it just made me so angry to read! There was a particular character that was very open about her racism towards Muslims, and I honestly despised her. It was very relevant though, as people that share her views do exist, unfortunately.

The plot was also very interesting, which lead me to reading the whole book over 2 or 3 days. It was fast-paced, and there were a few time jumps which I liked. Especially the one between 13 year old Muzna and 16 year old Muzna as it showed the differences between how she was then, and how she is now.

The only thing that I wasn’t too keen on is how some of the teenagers speak. I understand that it is set in a certain place, but I just don’t think that teenagers use some of the slang that the author used. I do understand that writing from the perspective from a teenage girl might be difficult when you’re not one, but I just wanted to mention that.

Overall, I really did love this book. It was engaging, tackled important issues and was representative of a group of people who don’t get as much representation as they need. I give it 4.5 stars.

I’d like to thank Macmillan’s Children for sending me a copy of I Am Thunder in exchange for an honest review. The opinions expressed in this review are completely my own.

Published by Books and Belle

Hi! This is my book blog, where you'll find reviews, me fangirling, recommendations, and a bunch of other stuff I haven't yet thought about. I hope you enjoy your time here, and feel free to contact me on my socials! View all posts by Books and Belle

42 thoughts on “Book Review – I Am Thunder by Muhammad Khan (Spoiler-Free!)”

Hi! This is my book blog, where you’ll find reviews, me fangirling, recommendations, and a bunch of other stuff I haven’t yet thought about. I hope you enjoy your time here, and feel free to contact me on my socials!